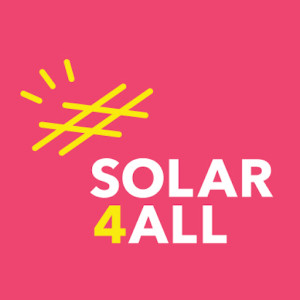 June 15, 2016 (Edmonton, Alberta) — A new campaign is hitting the streets this week to encourage the Alberta government to prioritize individuals, communities, First Nations and Metis settlements as it moves towards renewables. The Solar4All campaign aims to change not only the way energy is produced in Alberta, but the ownership model as well.

The Solar4All campaign will set up information tables in constituencies throughout the province in hopes of gathering thousands of signatures in support of policies that would spur community-owned solar in Alberta. The Solar4All campaign aims to get the government to prioritize renewables owned partially or fully by individuals, communities, farmer associations, municipalities, First Nations and/or Metis settlements. An online petition and social media campaign will complement the information tables.

Over the summer, Solar4All will demonstrate how community-owned large and small scale solar power installations can lead Alberta’s energy transition, create good green jobs, and ensure every Albertan can financially benefit from the province’s move towards renewables. The campaign will engage Albertans, promote solar projects in key areas, and engage people through a creative social media presence.

“Community-owned solar power is an opportunity for Alberta to change not just the way energy is produced but the way energy is owned, distributed and controlled as well,” said Greenpeace Climate and Energy Campaigner Mike Hudema. “Alberta should produce much of its energy from solar power installations owned by and for people and communities. We can move from a system that benefits a few companies to one that benefits us all of us.”

WHAT: Summer-long campaign aimed to get the Alberta government to prioritize renewables owned partially or fully by individuals, communities, farmer associations, municipalities, businesses, and First Nations and/or Metis settlements. Campaign will involve tabling for petitions in key constituencies throughout the province, social media engagement, and promoting several solar projects, including the current installation at Louis Bull First Nation.

WHEN & WHERE: Key constituencies throughout the summer.

VISUALS: For a video and photos of the installation of solar panels at the Louis Bull First Nation, click here.

WHO: Solar4All is a project of Greenpeace Canada, the Calgary Climate Action Network, the Alberta Green Economy Network and Keepers of Athabasca.